EDITORIAL NOTE FROM GENE (updated at 11:51 pm ET): The Hill is reporting that the Innovation Act, H.R. 9, is being pushed back until at least next week. I have heard rumors throughout the day that House Leaders from both parties have agreed to table H.R. 9 for the remainder of the summer (see for example PatentlyO). I have now been able to confirm that House Leaders have notified Congressional Offices that the earliest H.R. 9 will be taken up is September. 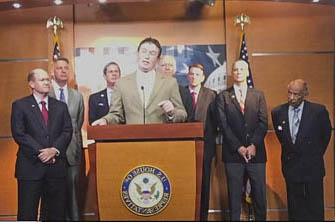 Congressman Tom Massie speaks in front of other members of the anti-Innovation Act coalition.

Members of both major American political parties from both the Senate and the House of Representatives came together at a press conference held on the afternoon of Tuesday, July 14th, to oppose the most recent round of proposed patent reform bills in either chamber of Congress. Their voices echoed earlier dissents voiced at various Congressional committee hearings held in recent months on the subject of patent reform, especially those concerns which have been raised regarding proposed bill H.R. 9, the Innovation Act.

“Ostensibly H.R. 9 is supposed to go after patent trolls,” said Congressman Thomas Massie (R-KY), who gave the opening remarks at the press conference. “The overarching problem with this bill is it never defines a patent troll. Everything it does to a patent troll it does to a legitimate inventor.” Massie noted his own experience as an inventor who built a startup company through intellectual property developed at the Massachusetts Institute of Technology and a personal encounter with a patent troll trying to enforce a weak patent against his company. The ability for small startups to enforce patent rights effectively against infringers protects a major swath of the U.S. economy. Massie said that if all of the startups that were launched through MIT research & development had their revenues combined, it would rank anywhere from 11th to 17th among the world’s national economies.

Independent inventors also had their criticisms of H.R. 9’s major overhauls brought to the table. Massie discussed a conversation he had with well-known inventor Dean Kamen, who Massie called the “Thomas Edison of our time.” Kamen made an analogy likening patent trolls to those who print counterfeit money, arguing that the appropriate answer to counterfeiters wouldn’t be to devalue the entire currency of the nation the way that the Innovation Act would devalue the U.S. patent system.

As has been the case in previous patent reform hearings, investors are also in the camp of those opposed to passage of the Innovation Act. Congressman Scott Peters (D-CA) were among those that day who reiterated the calls from the venture capital community that the broad changes of the Innovation Act could very well hurt investment in small inventors and startups. The mechanisms which the Innovation Act would put into place which are designed to prevent patent trolls from abusing unwitting victims would also have the effect of making it more difficult for legitimate inventors to enforce their own IP rights. Congressman Bill Foster (D-IL), another politician attending that day with experience as a small business tech startup owner and a cofounder of the Congressional Inventions Caucus, talked about how IP rights are sometimes the only assets startups have to attract investment. Anything that makes it harder for those businesses to enforce this property right raises more doubts that a venture capital firm can recoup its investment on a startup.

These protests to the Innovation Act are a refrain that keeps sounding in Washington and one that we’ve repeatedly noticed in our patent reform coverage here on IPWatchdog. A June 11th hearing of the House Judiciary Committee ended up approving a marked-up version of the Innovation Act by a 24-8 vote but not until many of the above issues were raised by Congressman John Conyers (D-MI), the ranking Democratic member of the committee. A lack of consensus on the language of the bill was evident by the many amendments proposed to the bill and the comments of many committee members who felt that the bill needed work before it would earn House approval.

In the Senate, representatives of a wide array of industry groups were outspoken in their opposition to passage of the Innovation Act at a March 19th hearing of the Senate Committee on Small Business and Entrepreneurship. Members of the panel speaking on behalf of universities, tech startups and the pharmaceutical industry raised various concerns pertaining to H.R. 9; one member of the panel even went so far as to suggest that the bill should be renamed the “Ending the American Dream Act”. In the Senate there’s more support for S.1137, the PATENT Act, but the bill was still hotly contested at a hearing of the Senate Judiciary Committee held on May 8th.

The bipartisan nature of the coalition forming to oppose sweeping patent reform is unlike that which would be seen on an issue such as climate change, noted Peters. Sen. David Vitter (R-LA) noted that his opposition stemmed mainly from his beliefs about conservative government. He argued that the Founding Fathers understood the value of IP, which is why patents and trademark rights are protected in the Constitution, so Congress needs to be extremely careful before taking action that could devalue the patent system. Vitter also stated that he was naturally suspicious of legislation leading to massive systemic overhauls and not targeted reforms. Joining Vitter, Foster, Peters and Massie at this press conference were Conyers, Congressman Curt Clawson (R-FL), Sen. Chris Coons (D-DE) and Congressman Paul Gosar (R-AZ), co-chair of the Congressional Inventions Caucus.

During a question and answer session one member of the audience, citing the December 2013 House passage of the first iteration of the Innovation Act by a 325-91 vote, asked whether there was any reason to believe that the next vote would be much different. Both Coons and Massie stated that there was reason to believe that opinions had changed among many members of Capitol Hill. Massie in particular noted that an informal whip count being taken around that time was returning some surprising responses from politicians.

Asked to point out some of the forces behind those in favor of passing the Innovation Act into law, Coons pointed out that a lot of that momentum has sprung from industries where patents aren’t central to the business and where the costs of royalties or patent litigation fees are large. The support of the Innovation Act has largely come from major players in the software or smartphone industries, Coons said. At the Senate Small Business and Entrepreneurship hearing discussed above, we pointed out how the only member of the witness panel in favor of the Innovation Act was a representative of the software industry. Support of the Innovation Act has also come from more mainstream media such as HBO’s Last Week Tonight with John Oliver, but as we discussed in an article critiquing Oliver’s segment on the Innovation Act, we pointed out that the comedian said he was arguing from the point of view of American small businesses but instead choose to support a piece of legislation which is more beneficial to his employer, which owns a portfolio of software patents.

There are a lot of people trying to sell a bill of goods under the guise of patent reform which are truly troubling to the legitimate inventors who the patent system is supposed to protect. The representatives appearing at Tuesday’s press conference indicate that a growing collection of the American political class hope that both halves of Capitol Hill can refocus their attentions on the targeted reforms that can actually halt patent troll abuses without stifling legitimate innovation.