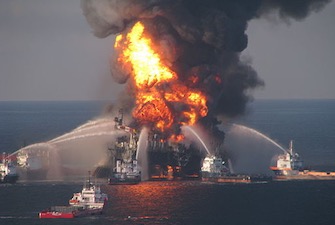 On April 20th, 2010, the explosion and sinking of the Deepwater Horizon oil drilling rig into the Gulf of Mexico, 42 miles off the shore of Louisiana, set off a summer-long environmental catastrophe. By the time the well being drilled by the Deepwater Horizon was capped 87 days later on July 15th, as many as 4.2 million barrels of oil had leaked into the Gulf. 11 employees on the drilling rig died in the original explosion and the resulting oil spill has killed thousands of animals and has had a devastating effect on coastal communities, especially those reliant on fisheries.

The oil leak was situated on the floor of an aquatic region known as the deep sea. Deep sea begins at depths of 200 meters (656 feet) or so, where light begins to become less visible. At depths of 1,000 meters (3,280 feet), atmospheric pressure from the surrounding water can reach 1,000 times surface pressures and temperatures hover at around 3 degrees Celcius (37 degrees Fahrenheit). The Deepwater Horizon was drilling into a reservoir of oil known as the Macondo Prospect at depths of about 1,500 meters, nearly 5,000 feet. Deep sea accounts for about three-quarters of all of the Earth’s water and plumes of oil reaching 22 miles long and more than a mile wide were reported after the Deepwater Horizon event.

At the beginning of July, BP plc (NYSE:BP), which owned the Deepwater Horizon as well as 65 percent ownership of the Macondo Prospect reserves, agreed to pay $18.7 billion to settle all state and federal claims stemming from the Gulf oil leak. This penalty, the largest for pollution in the history of the United States, awards nearly $5 billion to the states most directly impacted by the event: Texas, Louisiana, Mississippi, Alabama and Florida. Overall, the entire incident has cost BP more than $42 billion when accounting for cleanup fees, victim compensation and other costs, outpacing profits earned by the company since 2010 according to The Wall Street Journal.

A number of contributing factors led to the explosion of the Deepwater Horizon rig and most, as has been pointed out by Popular Mechanics, stemmed from a desire to keep costs at a minimum while maintaining high levels of oil production. A Congressional hearing on the oil spill in June 2010 revealed that parts of the well being drilled by the Deepwater Horizon were constructed with single string casing against an internal recommendation for an additional liner/tieback tube; the internal memo noted that single casing “was likely to be unsuccessful.” Disastrous gas flow issues also resulted from a decision to use only six centralizer metal collars instead of the minimum ten, which still would have resulted in “moderate gas flow problems.”

The oil spill sparked a massive cleanup effort that involved 48,000 people and 6,500 vessels by the end of 2010. BP reports that it spent about 70 million personnel hours on cleanup activities, including the deployment of about 2,500 miles of boom meant to contain or absorb the oil, by the time active cleanup operations in the area were ended by the U.S. Coast Guard in April 2014. 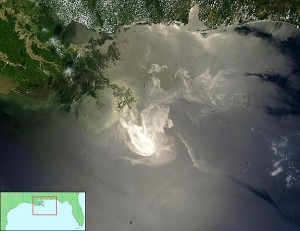 The fallout from the oil spill crisis, as well as the fall in crude oil prices, has been very damaging to BP’s finances. The company has had to cut employees from its workforce from all over the world, recently reflected in an announcement last December that hundreds of British workers would be laid off. BP has also divested itself of some of its holdings in the Gulf of Mexico, helping to distance the company from the disaster. Deepwater offshore oil drilling continues in the Gulf and a Louisiana-based company has recently filed for drilling approval with the Bureau of Safety and Environmental Enforcement for a site on the Macondo Prospect nearby the location of the Deepwater Horizon wreck.

Necessity is the mother of invention and the public health and economic concerns posed by an oil spill so close to so many vibrant coastal communities has spurred some very interesting developments. The BP oil spill itself is credited for encouraging the submission of tens of thousands of applications to the Environmental Protection Agency and the Coast Guard for new spill cleanup products.

Most oil spill cleanups involve the floating of a boom within the affected area of water in order to collect the oil. Some of the oil does disperse naturally into the water but chemical dispersants are often applied in order to speed the process along. Dispersants are rarely a silver bullet approach, however, and the chemicals can often cause as much or more damage to marine life as oil. One dispersant utilized during the Deepwater Horizon cleanup, known as Corexit EC9500A, was found to cause damage to the epithelial cells found in human lungs and fish gills. There are many new oil cleanup techniques that have been pursued since the BP disaster, some of which involve magnetized separation of oil and water, smart filters using nanoparticles or sponges which utilize carbon nanotubes. Here on IPWatchdog, we’ve previously covered a Massachusetts Institute of Technology patent protecting a magnetized system for removing oil from water.

Nanotechnologies are proving to have a major impact on oil spill cleanup innovation in recent years. Researchers at Ohio State University have pioneered a type of mesh coated with a fluorosurfactant, a material which attracts water but repels oil. The mesh has many nanoparticle bumps sandwiched between layers of polymer, which increase the mesh’s surface area and its ability to repel oil. The idea is to pump contaminated water through the mesh to more easily separate oil from the water. Microorganisms have also shown effectiveness in consuming large amounts of oil and oil-eating bacteria like Thalassolituus oleivorans and members of the genus Oleispira have been thriving in the Gulf. A 2013 report published in Science included the encouraging news that microbes have been degrading oil plumes in the Gulf at faster than expected rates, while noting that the impact to organisms higher on the food chain was yet to be seen.

A philanthropic challenge offered through the Wendy Schmidt Oil Cleanup X Challenge, a partnership of The Schmidt Family Foundation and the X PRIZE Foundation, was established as a response to the Deepwater Horizon leak. The first place prize of $1 million went to Illinois-based Elastec/American Marine for an oil skimmer that gathers oil at rates of up to three times the industry standard, collecting as many as 4,670 gallons of oil per minute. A second place prize of $300,000 was awarded to Norwegian-based NOFI for its Current Buster oil spill contingency system, which can be towed to collect large oil slicks. Other responses to the Gulf oil crisis from the nonprofit sector include TEDxOilSpill, which was held in June 2010 and included a conference of speakers discoursing on proper oil spill cleanup response.

Oil leaks can be sprung from events much less noticeable than the Deepwater Horizon explosion, such as the May 2015 Santa Barbara, CA, leak which was discovered by a beachgoer after tens of thousands of gallons of oil had already seeped into the ocean. One company, Liquid Robotics of Sunnyvale, CA, has developed a fleet of wave-propelled, solar-powered robotic units which patrol the oceans and can be configured to detect oil leaks. These units could be purchased by oil companies and set up around offshore rigs to quickly determine that a oil leak has sprung and take swift action to reduce their environmental liability.