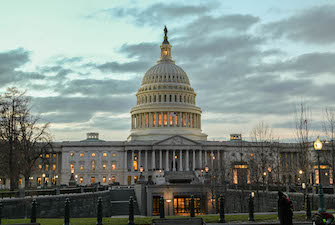 It’s not a breathtaking headline these days, but maybe legislation addressing non-practicing entities (NPEs) is not so necessary right now. Perhaps the statistics about “patent trolls” that media outlets have thrown around may not properly demonstrate the actual state of patent affairs (or are at least a little outdated). And just maybe the patent practitioners clamoring for careful, measured patent reform are correct in following their gut feelings that the times have changed. Could it be?

What is more incredible is that the report credits the Supreme Court’s recent decisions for the decline in patent litigation. One would have to be completely oblivious to patents if he did not know that Alice Corp. v. CLS Bank, issued in June 2014, has killed over a hundred software patents owned by both NPEs and practicing entities. Perhaps even more incredible is that this main culprit for patent litigation slowing only affected the latter half of 2014 and is perhaps a sign of what is still to come.

The biggest story is that compared to the past several years, which have seen 20–30% growth in litigation filing rates on average, 2014 revealed a 13% decrease in patent lawsuits filed. According to the PwC study, this decline in patent suit filings is the first year-over-year drop since 2009 (p. 3).

The study concluded that overall NPEs are 10% less successful than practicing entities who take trial to verdict (p. 9) and attributed both filing rates and success rates to patent-eligible subject matter being constrained following the Alice Corp. v. CLS Bank decision and the higher likelihood of the losing plaintiff having to reimburse defendant’s costs following two 2014 Supreme Court decisions.

Overall, damages continued a falling trend over the past 15 years as the median award for 2010 – 2014 fell by 45% to $2.9 million (p. 4). Specifically, last year the median damages award was $2.0 million, which PwC says is the second-lowest in 20 years. The study also notes that while there have not been any billion-dollar verdicts since 2012, 2014’s Masimo Corp. v. Philips Electronics yielded the 10th highest-ever award of $467 million (p.5).

Still, the statistics point to a disparity in patent damages for NPEs. For instance, even though overall median damages continued their downward slide in the past five years to $2 million, damages going to patent trolls increased from $7.5 to $8.9 million since last year (p. 4). In the cases that NPEs won in 2014, damages were 4.5 times more than practicing entities.

The Likely Causes for the Decline

The primary culprit for the drop in patent infringement suit filings appears to be Alice as the authors attribute the “dramatic shift” to Alice Corp. v. CLS Bank (see study pp. ii, 3). The Supreme Court’s Alice decision last June has been used to kill a large amount of software and business method patents in litigation that allegedly claim “abstract ideas.” One April report has totaled the casualties from #AliceStorm to be over 3,000 claims from 117 patents in at least 55 decisions.

Though software is still considered patentable, the application of Alice by District Courts and the Federal Circuit is not always clear and risking the validity of your patent is a steep price. Even with guidance from the Federal Circuit in Ultramercial (“using advertising as an exchange or currency” is not patentable subject matter) and DDR Holdings (a “solution is necessarily rooted in computer technology in order to overcome a problem specifically arising in the realm of computer networks” can be patentable), every owner of a software patent should be a little worried whether their inventions could survive an Alice invalidity argument. On the other hand, potential defendants of infringement cases now wield a powerful weapon to possibly end (and even deter) patent suits from trolls or practicing entities, alike. PwC’s statistics support what patent practitioners have been observing for the past 11 months—this new potential for patent death under 35 U.S.C. § 101 has had a tremendous chilling effect on the filing of patent infringement lawsuits.

Two other recent Supreme Court cases have also made all patent owners, let alone NPEs, think twice about filing an infringement lawsuit (p. ii). For instance, Octane Fitness LLC v. Icon Health & Fitness Inc. (April 2014) made it easier for District Courts to make the loser pay for all the attorney costs when the lawsuit is deemed “frivolous.” Highmark v. Allcare Health (also April 2014) gave the District Court more discretion was such awarding of fees is appealed. While this case-by-case determination of when litigation is both “brought in subjective bad faith” and “objectively baseless” is hardly the black-and-white “loser pays” provision many victors hope for, the potential for fee shifting certainly contributes to the calculus of an NPE’s economic strategies for patent assertion.

Another contributing reason for the drop in number of infringement suits filed has to be the availability and use of Inter Partes Reviews and other administrative trials from 2011’s America Invents Act. IPRs, Post Grant Review, and the Transitional Program for Covered Business Method present other tools that defendants have to slow a patent owner and/or kill a patent that they allegedly infringe. They have been available since September 2012 but are only recently accepted as an inevitable defense tactic. The most popular proceeding filed at the U.S. Patent and Trademark Office is the IPR which petitioned to the Patent Trial and Appeal Board (PTAB) by defendants upon the filing of almost every patent infringement suit. IPRs challenge the validity of the patent and had almost a 91% institution rate in the first year (2012-13), which gave the PTAB the nickname of the “Patent Death Squad.” While the percentage of petitions that are instituted have come down to the 60% range, USPTO statistics of February 2015 reveal that the PTAB canceled over 90% of the IPR claims that reached a final written decision. Again, IPRs and the PTAB proceedings must be considered when planning a patent licensing or litigation strategy. Accordingly, PwC’s statistics certainly leave room for IPRs to be at least partially responsible for deterring the enforcement of patent rights.

While it may be easy to chalk connecting these causes up to hindsight, unfortunately, most patent owners and practitioners were aware of how these changes in the law could affect patent rights. Of course, the current depressed patent market also reflects the instability caused by the legal changes.

The Effect of the Report on the Patent “Trolls” Debate

On the other hand, the public has not necessarily embraced the recent law changes as significant and the media continues to rely on figures that may not necessarily reflect the current turmoil of the patent world.

As recent as April 29, 2015, the Washington Post pleaded with Congress to act against patent trolls and cited last year’s PwC report on 2013 patent litigation. The Post’s article referenced true stories of patent system abuse and aimed to raise awareness of a serious issue. However, the article generally relies on PwC’s old statistics as support for an apparent patent troll problem where “patent trolls are responsible for 67 percent of all patent lawsuits filed — up from just 28 percent five years before” and it’s rising.

Will This Stop Reform?

Earlier this week theHill.com reported that the House Judiciary Committee will not mark up its patent reform bill the week before their Memorial Day recess, as they are likely still discussing matters with stakeholders. The momentum for this recent wave of patent reform has been a roller coaster ride since the Innovation Act was pulled in May 2014 (HR-3309) and reintroduced in February 2015 (HR-9).

Accordingly, there is little doubt that the release of PwC’s report in the midst of the patent reform push was no coincidence. For instance, last year PwC released their study of 2013 litigation in July 2014. Perhaps the news of the study came just in time as Chris Barry, an author of the report and a partner with PwC’s forensic services practice, stated in a CNBC interview that we will “probably see this trend continue, and more dramatically” because a full year’s worth of Alice’s effects could reveal a different picture.

As of today, these are a handful of top candidates for patent reform and here are some of the biggest criticisms with the bills in their current forms: 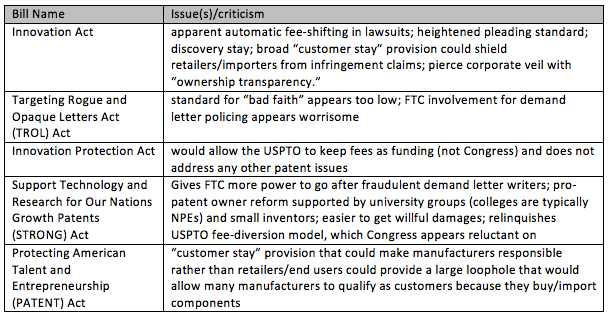 The motivation for crafting most of these pieces of legislation was to reverse the “damage” trolls cause to U.S. businesses and their innovation. While the horror stories of patent system abuse are not precisely captured by PwC’s study, and abusive demand letters and extortion schemes certainly exist, the public’s visceral reaction to “trolls” may lose the bulk of its statistical support with PwC’s numbers revealing a down-turn in patent lawsuit filings. Limiting every patent owner’s access to the courts will likely continue to lose popularity.

Specific issues such as vague/fraudulent demand letters, USPTO fee diversion, and trial procedure would be better addressed directly through small, restrained bills or better regulated through government agencies (e.g., the USPTO, the FTC).

At the very least, this PwC study of 2014 patent infringement litigation demonstrates that this chilling effect likely suggests that these tools (e.g., Alice, IPRs, fee-shifting) may deter NPEs from filing suit. One would likely assume that patent suits that are missing from 2014 are some of the more spurious patents that may have typified shakedown lawsuits and ambiguous demand letters in the past, but it is not directly proven in this study. There will still be calls for “troll” reform.

Nevertheless, the people, companies, media, and lobbyists soliciting for patent reform recently will have to address this PwC report if they still want to push for legislation—at least because so many of them cited last year’s report as clear evidence to push reform at the time. Other reasonable considerations for patent studies and reform discussions moving forward include:

While some are neutral on their face, these may be valid concerns that should be examined over time and reveal further insight. With more research, maybe an increase in the NPEs’ median damage awards could be shown to indicate that plaintiffs are more carefully choosing patents to enforce and fewer frivolous cases are being filed.

While patent system abuse certainly needs to be monitored, the current pervasiveness of the alleged “troll” problems needs to be examined more closely to determine if sweeping change is the only solution. In the meantime, the inevitable conclusion from recent studies should be to “pause” the talks of patent reform and gather more data—especially considering the effects from Alice and other recent law changes on 2014 patent litigation filings may only be an indication of further decline in the future.