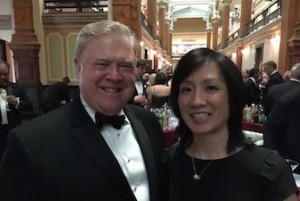 On Tuesday, May 12, 2015, Gene and I attended the National Hall of Fame 43rd Annual Induction Ceremony at the Smithsonian’s American Art Museum and the National Portrait Gallery, in Washington DC.  This year the ceremony included the induction of 14 different Inventor’s whose life-changing achievements have benefited humanity through their groundbreaking work.  Master of Ceremonies for the event was CBS Sunday Morning correspondent and Host of the Henry Ford’s Innovation Nation, Mo Rocca. 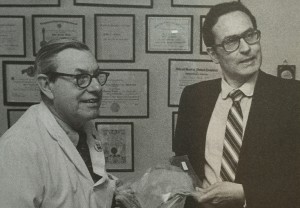 The first two inventors inducted into the Hall of Fame this year were Massachusetts General Hospital Surgeon and Professor of Surgery at Harvard University, Dr John Burke and MIT Professor Dr. Ioannis Yannas (both pictured right) who worked together on developing a substance which could be used to heal the wounds of burn victims.  Through the research, experimentation and development of this cross-disciplinary collaboration between an engineer and a physician, what resulted was the first commercially producible Regenerated Skin, Patent No. 4,418,691, which to this day is responsible for saving the lives of thousands of burn victims, around the world.  Dr. Burke passed away on November 2, 2011, while Dr. Yannas continues to teach at MIT. 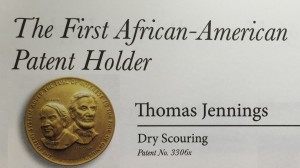 The next Inductee Thomas Jennings, was a skilled tailor and clothing store owner in New York City in the early 1800’s.  He was disappointed with conventional methods of cleaning clothing at the time and wanted to come up with a better method that would minimize damage to his customers clothing. As a result of his research and experimentation, he came up with a process that did just that and likely led to money savings as his process would also elongate the life of those fabrics.  He applied for his patent in 1820 as a free man and in 1821, 44 years before the end of Slavery in the United States, was granted Patent No. 3306X, becoming the very first African American granted a patent in the United States.  Unfortunately, his original patent and its drawing were destroyed in The Great Patent Office Fire of 1836.  Mr. Jennings was born in 1791 and died on February 11, 1859. 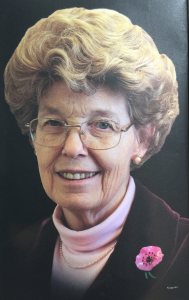 Dr. Mary-Dell Chilton (pictured right) discovered in 1976 that a bacterial cell could transfer DNA into a plant cell and kicked off an international competition to determine how the genes are integrated into a plant’s genome and how this could be used in real world applications. She later led a team whose research and development led to the produced of the first transgenic plant in 1983. Chilton was issued Patent No. 6,051,757 on her invention that she hopes will be used to help feed the ever growing population of the world. Dr. Chilton continues her research to this day at Syngenta in a building that bears her name. During her interview for the ceremony Chilton said, “I hope I love to see the acceptance of this technology in my lifetime.”

Dr. Charles Drew (pictured left), an African-American physician renowned for his work in blood plasma preservation, was the firsts Director of the Red Cross blood bank and the inventor of the Surgical Needle, Patent No. 2,389,355. Dr. Drew’s research into the storage, processing and shipment of blood plasma resulted in the lives of hundreds of Britons being saved during World War II and continues to save lives every single day. At the time of his untimely death on April 1, 1950 at age 46, Dr. Drew was a professor and chief of surgery at the Howard Medical School. 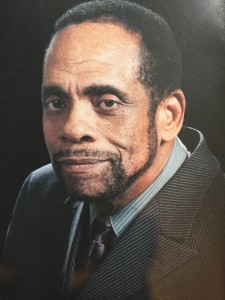 Dr. George Alcorn (pictured right) is accomplished physicist and engineer, is noted for his aerospace and semiconductor inventions. During his career at NASA Goddard Space Flight Center (GSFC), Mr. Alcorn developed the X-Ray Spectrometer, Patent No. 4,472,728, which detects radio signatures at a more distant and accurate rate than ever was possible before. His invention has had a huge impact on the continued evolution of imaging devices. Dr. Alcorn conducted significant work in high-performance semiconductor devices at IBM until he joined NASA in 1978 where he worked for the remainder of his career. He is also the founder of “Saturday Academy” a weekend math and science honors program for inner-city middle school students. 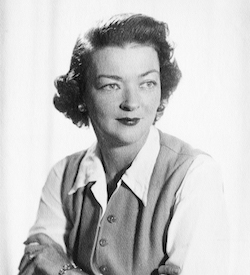 Marion Donovan (pictured left) is one of the few successful women inventors of her error. Prompted by the frustration with the repetitive task of changing her young daughter’s soiled cloth diapers, clothing, and bed sheets, Marion used her plastic shower curtain down and used it to craft a diaper cover that would keep her baby and her baby’s surrounding area dry. Her invention, a Waterproof Diaper Cover, Patent No. 2,556,800, which she called “the Boater” was made of breathable cloth, and snap fasteners and is the the predecessor to the disposable diaper of today. Marion, born in 1917, passed away on November 4, 1998 at the age of 81. For more information please see The Evolution of Diapers: How waterproof diapers made parenting much easier.

Stanford R. Ovshinsky (pictured right), a self taught, prolific inventor and physicist was inducted into the Hall of Fame for his pioneering work in multiple fields which had an impact on many aspects of modern life. Mr. Ovshinsky discovered that amorphous materials could be reversibly changed between amorphous and crystalline phases by an energy source, such as electricity or a laser beam. The field he originated became known as Ovonics, and led to a wide variety of innovative applications including mass produced flexible solar panels, computer memory, and flat screen TV displays. His invention, the Nickel/Metal Hydride (NiMH) Battery, Patent No. 4,623,597 has become an important power source for electric and hybrid vehicles and many of today’s consumer electronics.   Mr. Ovshinsky was dubbed “The Edison of our age” by The Economist in 2006 and by the time of his passing on October 17, 2012, was granted well over 400 patents in his lifetime. 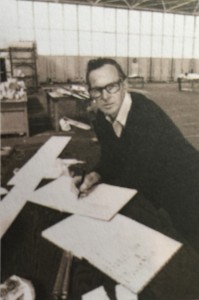 Dr. Paul MacCready (pictured left) was an aeronautical engineer who is known as the “Father of Human Powered Flight.” In 1977, Dr. MacCready invented a bicycle powered craft he dubbed the Gossamer Condor, Patent No. 4,206,892, followed by the Solar Challenger which was the first solar powered human powered craft to cross the English Channel. He later went on to work for NASA where he applied his ideas to both the Helios and Pathfinder Projects. Born in 1925, Dr. MacCready passed away on August 28, 2007. His original invention, the Gossamer Condor is currently on display at the National Air and Space Museum in Washington, D.C.

Shuji Nakamura (pictured right), a 2014 Nobel prize recipient, was inducted into the Halll of Fame for his work on the Blue LED Patent No. 5,290,393. Mr. Nakamura’s groundbreaking inventions have numerous applications in many disciplines including communications and information, energy and the environment and health care and life sciences. Mr. Nakamura also invented the blue laser which has led to new industry standards including Blue-ray. During his video for the induction ceremony, Mr. Nakamura said, “The worse time is often the best time to innovate” 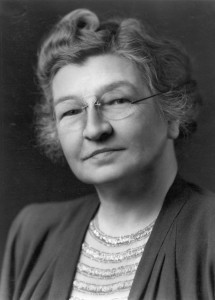 Edith Clarke (pictured left) was a pioneer of her day often the first female of record to accomplish what she endeavored to do. Ms. Clarke was not only the first professionally employed female Electrical Engineer in the United States, but was also the first female full voting member of the IEEE as well as the first female professor of electrical engineering in the country. Ms. Clark, the inventor of the Graphical Calculator, Patent No. 1,552,113, was seen over her career as an authority on the manipulation of hyperbolic functions, equivalent circuits, graphical analysis, and electric power systems. Born in 1883, she also worked on the design and building of hydroelectric dams in the West before her death on October 29, 1959.

In 1994, Dr. Jaap C Haartsen (pictured right), with more than 25 years in the Wireless Communication industry, laid the foundation that led to his invention of Bluetooth Wireless Technology, Patent No. 6,590,928, which enables communications between a seemingly endless array of devices. Although he started his career at Ericsson, Dr. Haartsen later became CTO of a wireless wearble products company that was acquired by Plantronics in 2012. Currently, Dr. Haartsen is still an expert on wireless systems and technologies at Plantronics. 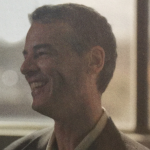 Dr. Kristina Johnson (left) and Dr. Gary Sharp (right) were inducted as the result of their work on Polarization control technology, Patent No. 5,132,826. Johnson (pictured left) is a pioneer in optoelectronic processing systems, 3D imaging, and color management systems. Her work formed the basis for 3D films, rear projection systems for televisions, digital mammograms, faster screening of pap smears for cervical cancer, and foundational work that has resulted in near-to-the-eye displays. Sharp, an aspiring PhD student, joined Johnson’s team. Together they have 28 patents that demonstrate their innovations with polarization control technologies.  Their Polarization control technology is used in products such as projection televisions, front-projection displays, and most 3D digital cinema installations today. 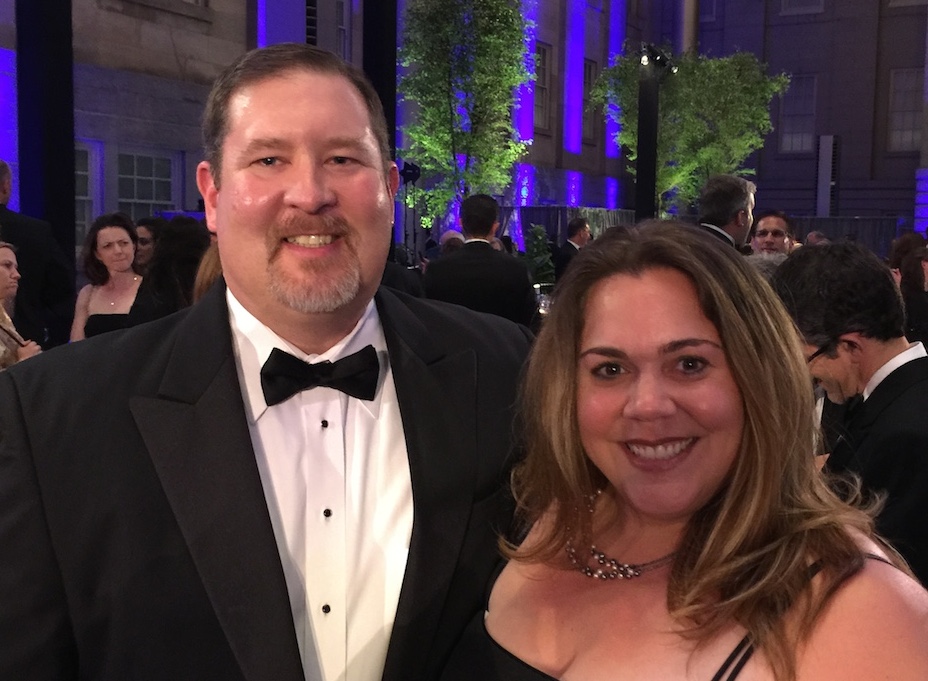