The Intel Compute Stick turns any monitor into a working computer 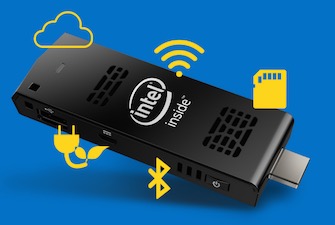 It has been a truly revolutionary year in terms of consumer technologies being brought to market. In recent months we’ve been following the trend towards wearable technology the rapidly developing field of autonomous vehicles, unmanned aerial vehicles, or drones, as well as automated robotic technologies. Today, we have our eyes set on a completely new area of innovative consumer tech: the stick computer, a device which can turn any monitor with a High-Definition Multimedia Interface (HDMI) port into a working computer.

Recently, Intel Corporation (NASDAQ: INTC) introduced the world to the Compute Stick, a palm-sized device with an HDMI plug offering two gigabytes of memory, 32 gigabytes of storage space and runs Windows 8.1 as operating software; another version of the Compute Stick which will release in June offers an Ubuntu OS. This stick computer comes standard with WiFi and Bluetooth connectivity and a 64-bit quad-core CPU, supporting processing power comparable to tablet computers. When the Intel product hit stores in March, it’s retail price was $150. Instead of spending close to $1,000 on a smart television that runs Netflix and entertainment apps, a person could spend less than $200 to turn a monitor already owned by that person and transform the monitor into a working computer.

As a couple of tech review publications have already pointed out, this invention could have some revolutionary impacts in very important sectors where cheap IT is always wanted. Schools and educational institutions of all kinds could upgrade outdated computer laboratories for a fraction of the cost of replacing an entire desktop unit, as long as the old monitor has an HDMI port. The same concept could also provide a great cost savings for business IT upgrades as well.

A quick look at Intel’s intellectual property in this area shows us that the company had long been considering the use of television displays as remote screens for computer systems. U.S. Patent No. 6,037,981, entitled Method and Apparatus for Using Digital Televisions as Remote Personal Computer Displays, was originally filed by Intel back in September 1998 and issued in March 2000. It claimed a method of capturing digital video data signals generated by a computer system, compressing those signals, capturing generated audio signals and converting the audio and compressed video data into broadcast digital data packets which are transmitted to a digital television. This system operates wirelessly but requires the compression of video data, providing a lower quality picture than the compression-free Compute Stick.

We also found a couple of Intel patents that protect technologies related to HDMI data transmission, especially the secure transmission of protected content. U.S. Patent No. 8,838,758, entitled Sink Device Addressing Mechanism, was assigned to Intel last September. It protects a source device that detects a plug event of a sink device or a branch device into a port and assigns an address to the sink device as a port number in such a way that every sink device and branch device is assigned a corresponding port number as a sink address. This innovation enables an Internet-connected network to handle the plug-and-play of content sources on a display device, like a television, while providing better management of the more complex network topology posed by plug-and-play computing.

Intel may have the most powerful stick computer available but it’s not the only player in the market. Google, a company determined to exert its ubiquitous presence in every sector of tech development, has made a logical step into this arena as well. The tech giant has announced plans with Taiwanese electronics firm Asus to develop the Chromebit, another HDMI dongle that runs a version of Google’s Chrome OS. The Chromebit, which will hit the market sometime this summer, will retail for less than $100 but cannot run local applications in the way that Intel’s product supports, as the Chrome OS requires an Internet connection to utilize web-based apps. Still, Google’s efforts will likely be buoyed by the success of its Chromecast product, another HDMI dongle that enables streaming video to be transmitted from a device to a TV.

These two might be the biggest players in the field but they’re not the only ones in the stick computer market. Dell markets the Wyse Cloud Connect, which supports an Android OS. Companies like Mouse Computer, Vensmile and MeeGoPad all have or will release stick computers which run Windows OS. The price point for all of these devices is over $100; in the case of the Mouse Computer m-Stick, $175 when it debuts in Japan. To judge from the tech world’s coverage of this market, it’s assumed that Intel’s Compute Stick, even with its flaws such as lack of computing peripherals for user input, will be the dominant force while Google might be able to suck up a good portion of the low-end market.

It’s certainly clear that computer processing is a technology that is both shrinking in size and increasing in power. Smartphones have enabled pocket computing for years, but there have been plenty of computing manufacturers moving into the mini personal computer sector, marketing processor components which can be connected to a display monitor and other peripheral hardware. The allure of stick computing over those products would seem to be the ease of plugging a device into a widely available port and creating a desktop computer on-the-go. Although the market for keyboards, mice and other user interface equipment for stick computers will require some development, this could develop into a robust sector of consumer computer tech in the coming years.