Recently, we took a look at the spread of video on-demand (VOD) services which are available to more American consumers than ever before through Internet-based applications and smart television technologies. Today, we’re following up to profile the companies that have significant patent holdings in this field and the technologies that they’ve been developing. 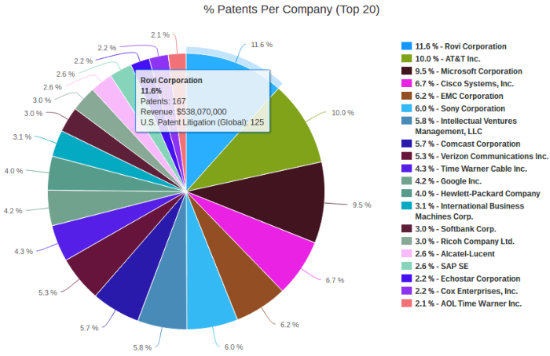 We used the patent portfolio analysis tools available through Innography to identify a total of 2,500 U.S. patents active in this field which were assigned to 318 different organizations. Of those organizations, the largest single portfolio was the 167 U.S. patents held by Rovi Corporation (NASDAQ:ROVI) of Santa Clara, CA, a developer of guidance technologies for discovery and navigation services found on a variety of computing electronics products. Rovi’s currently portfolio is cobbled together from patents originally assigned to companies such as United Video Properties Inc. and TV Guide, Inc., along with the corporation’s own R&D. Two of the Companies We Follow here at IPWatchdog came in as runners-up to Rovi. AT&T (NYSE:T) came in second place in this sector with 144 U.S. patents and Microsoft (NASDAQ:MSFT) owns 137 U.S. patents. 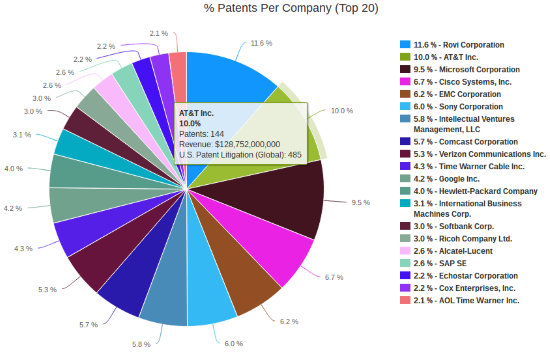 If we take a look at the bubble chart (below) which graphs corporate patent holdings against the resources held by those companies we can get an idea of the strong activity that seems to be running through the video on-demand market. The leading edge of the upper right quadrant, which features the companies that have the most patent holdings as well as resources, is made up of AT&T, Verizon (NYSE:VZ), Microsoft and Comcast (NASDAQ:CSCMA). The Rovi Corporation is aligned with this leading edge thanks to its large patent portfolio but its relatively scant resources have forced it into the lower left quadrant of the chart. 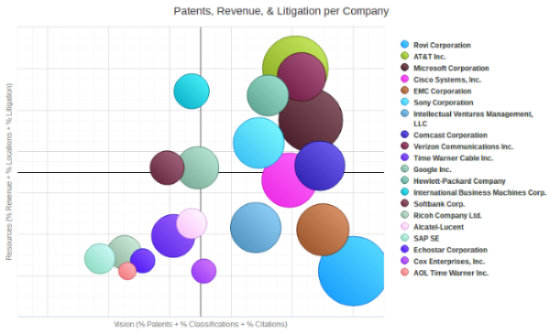 The navigation and guidance technologies protected by Rovi’s IP holdings have been incorporated into a wide array of electronics such as set-top boxes, digital video recorders, tablets and other mobile devices. As a result, the company is engaged in a range of licensing and litigation activities relative to its patent holdings. The corporation has brought suit against Netflix in recent years for alleged infringement of patents held by Rovi which protect interactive program guide (IPG) technologies. Recently, Rovi renewed a product and patent licensing agreement for many of those same IPG technologies with major Japanese electronics manufacturer Sharp. At the end of March, the company announced that the Fan TV movie discovery and sharing service which it had recently acquired had earned Rovi a Cablefax Tech Award for the overall tech innovation vendor category. The corporation is facing some turbulence from an activist investor, Engaged Capital, which is trying to influence Rovi’s upcoming board of director nominations while holding only 0.6 percent of the company’s stock. 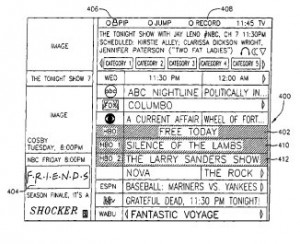 A couple of the patents issued to Rovi by the U.S. Patent and Trademark Office that we noticed today protect technologies designed to notify television viewers of newly available content. Alerts regarding special preview periods issued by premium content channels are the focus of U.S. Patent No. 8997148, which is titled Premium Channel Promotion System and Method. The patent claims a method of receiving program listings for a plurality of channels, generating a display including a subset of the program listings for restricted access channels, determining that access to those channels is no longer restricted, determining whether a user is a non-subscriber to the restricted access channel and displaying a promotion tile providing access to the channel. This system would be able to, for example, alert television watchers in a certain city or region that a free trial of HBO is available to them for a limited time. A general notification system for alerting a viewer that a new channel or service may be available is featured within U.S. Patent No. 8955017, which is titled Channels and Services Display. The method for indicating availability of a new service protected by this patent involves generating a display of a program title on a program guide display, receiving an indication that a new service is available, determining that the new service was previously unavailable, generating a simultaneous display of an indicator and program title to indicate availability of the new service, receiving a user selection of the indicator and generating a list that only includes services available to the user for the first time. This system is designed to help digital television viewers identify new content in programming guides that may deliver 150 or more channels. 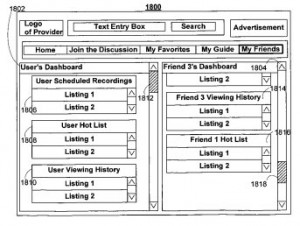 between friends who have separate VOD accounts is described within U.S. Patent No. 8943539, titled Enabling a Friend to Remotely Modify User Data. This patent claims a method for utilizing user profile data maintained by an interactive media guidance application that involves by maintaining a user profile, receiving input designating a portion of the user profile, generating authorization data associated with that profile portion for a friend and receiving an input from that friend which enables access to that portion of the user profile for the extrapolation of data regarding media assets and recommendations. This invention is intended to allow friends of VOD subscribers to make recommendations or receive recommendations logged by the other user.

Unlike Rovi, AT&T actually offers its own VOD service through its U-verse triple-play telecommunications service which offers broadband Internet as well as telephony and IP television. When it was first unveiled in January 2013, U-verse video on-demand was available to U-verse subscribers for an additional $5 per month, putting it under the price point of Hulu and Netflix but available to a smaller number of consumers. The service was designed to enable subscribers to view any one of 1,500 movie titles whenever they wanted. The corporation still has some interest in maintaining conventional TV broadcast services, thanks mainly to its 2014 acquisition of DirecTV for $49 billion, but AT&T’s research and development in the field of video on-demand is laudable.

Those VOD subscribers who find themselves cursing out their television sets when a popular title has Internet lag problems because so many people are streaming it at once may be interested to look at U.S. Patent No. 8707375, which is titled Peer-to-Peer Video on Demand Techniques. The patent claims a method of searching a network to identify multiple users having devices to store VOD content, receiving a request for a video item, identifying the geographical location of the requestor device from the user’s billing address, searching an index of the network’s multiple users to identify a source device containing the video item and within geographical proximity of the requestor, providing a key to the requestor device that allows peer-to-peer communication services with the other source device and facilitating that connection so that the requestor device receives a portion of the video on-demand content. This innovation is designed to address shortcomings in VOD systems that utilize a centralized distribution point that can become overloaded with requests for popular and/or new content. 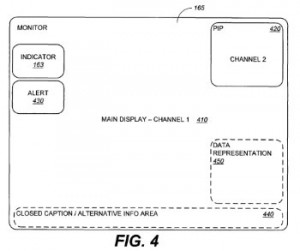 Like Rovi, AT&T also has some VOD technologies for identifying new content of interest to certain users, as is reflected in U.S. Patent No. 8402503, entitled Interactive Program Manager and Methods for Presenting Program Content. The patent protects a multimedia system that includes an analyzer coupled to a receiver and a program store that is configured to monitor a source to identify content of interest to a particular user; if content of interest is identified, the system sends a menu display with a selectable submenu which displays an alert regarding new content of interest. This innovation is capable of making viewers aware of new content while watching a video, which may make VOD systems more responsive to important breaking news and weather alerts. More effective advertising systems for VOD services seem to be the focus of U.S. Patent No. 8966553, titled Analyzing Internet Protocol Television Data to Support Peer-Assisted Video-on-Demand Content Delivery. This patent discloses a video-on-demand server in an Internet protocol television network which includes a processor executing instructions to select a content item, determine the number of copies of a content file to reside on a peering network, evaluate power state data for a plurality of set-top boxes forming the peering network to determine a safety factor for over-populating the network, divide each content item into chunks, divide those chunks into stripes and stream stripes sequentially in response to receiving a request for playback. The invention also seems to enable more efficient transmitting of content to subscribers in large metropolitan areas serviced by regional video hub offices.

What today’s profile of companies patenting VOD technologies is showing us is that although some companies like Netflix and Amazon are becoming renowned for their successful video on-demand services, those aren’t the companies which hold the largest patent portfolios in this sector. Microsoft itself doesn’t offer any video on-demand services except what is available through third-party apps like Sling TV that can be accessed from the Xbox One. What the company does offer, however, is Microsoft Azure Media Services (AMS), software that allows a user to construct a media distribution platform which can include VOD. A global release of an AMS app for even greater connectivity to the service should be happening this year. 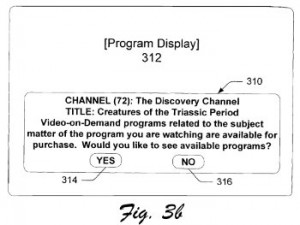 Every company we’ve profiled today has had at least one patent protecting a technology related to informing television viewers of newly available content which may be of interest to them. Microsoft has its own holding in this area thanks to the 2009 issue of U.S. Patent No. 7516472, which is titled Using Broadcast Television as a Portal for Video on Demand Solicitation. The method for facilitating reduction of redundancy prompts displayed to a user protected here involves receiving media content from a content broadcasting system, monitoring media content to detect a trigger event, storing the event, maintaining a history of prompts displayed to a user, determining when the trigger event is unique, determining VOD offerings associated with the event and providing a user with a prompt notifying him or her that VOD offerings associated with the event are available. This invention is designed to notify viewers that video on-demand content similar to the content currently being viewed is available. We were also intrigued to note a system for improving the accuracy of recommendations provided by VOD systems, which is protected by U.S. Patent No. 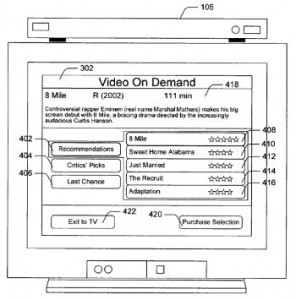 7904924, entitled Video-on-Demand Recommendations Based on Previously Viewed Television Programs. The patent claims a method of maintaining television data that identifies broadcast television programs previously viewed by a person, maintaining VOD data that identifies VOD services purchased by the person, associating a particular broadcast program with a particular video on-demand in such a way that assigns a weight describing a strength of association between the two items and recommending the video on-demand to a person who has watched the broadcast program. This innovation is designed to counteract the thinness of historical VOD data sets for some users who do not watch a significant number of VOD titles.