Some time ago, a colleague posed an interesting question to me in hopes that Lex Machina’s data might be able to shed some light: Has the kind or size of firms handling patent cases changed much over the last few years? In other words, are companies increasingly choosing smaller, cheaper boutiques, or are they relying more often on “BigLaw” firms?

To answer these questions, I’ve combined Lex Machina’s own data on cases filed and law firms involved with data from American Lawyer’s top 100 and American Lawyer’s Top 200 firms lists (known as the AmLaw 100 and 200) published between 2011 and 2014.[1]

Let’s start with a chart showing the number of patent cases filed each month since 2007: 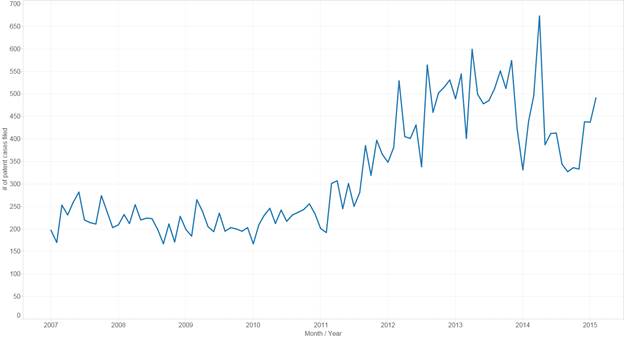 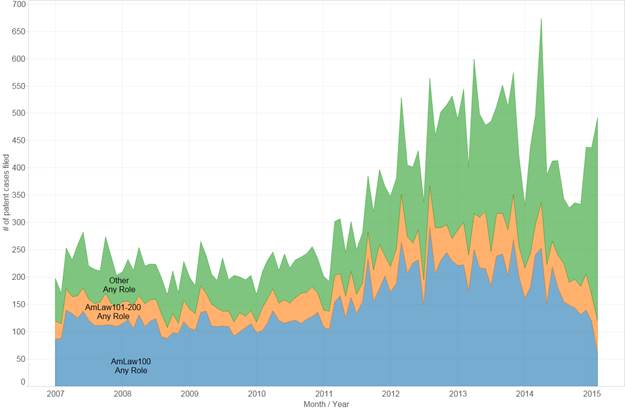 Because the background volume of patent litigation is increasing, I’ve redrawn this chart to show the cases handled by each tier of firms as a percentage of the total volume of cases on the vertical axis. 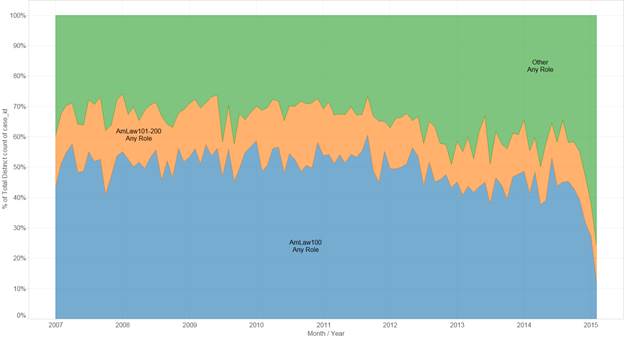 Before I address what’s going on in the right-hand side of Fig. 3, where it appears that the case numbers for AmLaw firms precipitously drop in the last 3 months, I first need to further divide our chart between plaintiff- and defense-side representations in a case. 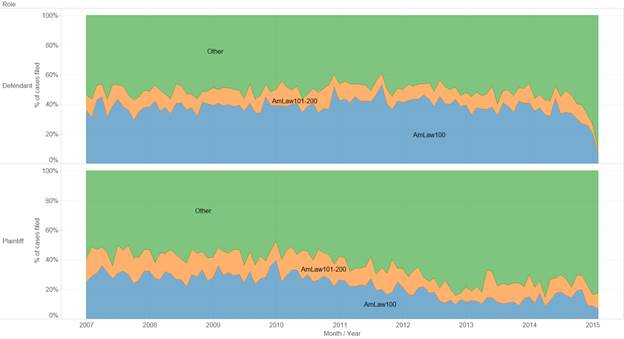 From this perspective, we can see the recent drop in Fig. 3 is actually driven by a drop on the defense-side numbers shown in the upper portion of Fig. 4. This drop is better understood as a result of time-lag: defendants have no obligation to immediately disclose their counsel. Rather, by waiving service or through schedule extensions by local counsel, a defendant may not file a responsive pleading with its primary counsel until the second or even third month of a case, leaving AmLaw firms underrepresented in recently filed cases. Indeed, like a standing wave formed by an underwater rock in a moving stream, a drop in AmLaw defense-side representation over the last 2-3 months has consistently characterized the data since I first began investigating this topic several months ago.

To eliminate this bias on the trend, I’ve removed the most recent three months from the charts below. 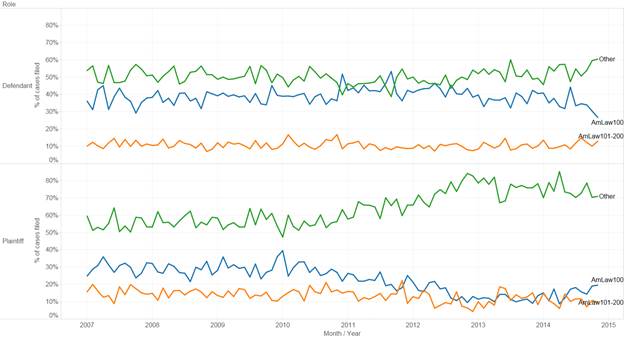 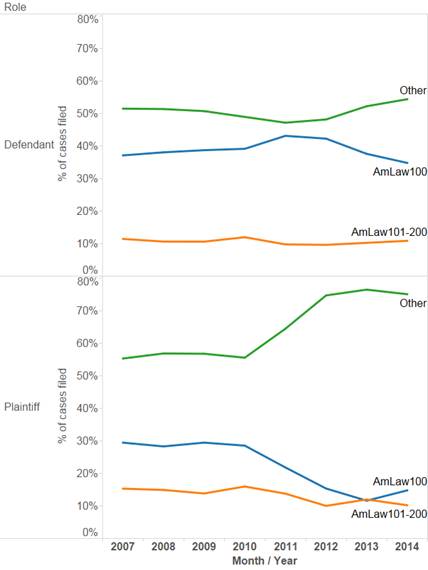 Based on these charts some clear trends emerge:

AmLaw100 firms traditionally handle a higher percentage of cases on the defense-side (about 35-45%) than the plaintiff-side (about 10-30%).

As case filings rose after 2009, much of the defense-side increase went to AmLaw 100 firms. However, more recently, AmLaw100 representation of defendants has declined, from a high point in 2011 of 43.1% of cases filed, to only 34.8% of cases filed 2014. During that same time, non-AmLaw firms have been seeing a corresponding increase in the percentage of cases they handle, rising to 54.4% in 2014.

On the plaintiff side, AmLaw100 firms appeared in about 30% of new cases up through 2009; their percentage dropped to around 15% in recent years. Correspondingly, non-AmLaw firms have seen a major jump on the plaintiff side, rising from 55.5% in 2010 to a number near 75% for the last 3 years.

Firms ranked in the AmLaw200 (but not in the AmLaw100) have traditionally represented a smaller fraction of cases than either their AmLaw100 or non-AmLaw colleagues, but this fraction has remained constant within a few points of 10% for defense work. On the plaintiff side, these firms have seen their share of the cases drop from 15.3% to closer to 10% in 2014.

[1] Note on methodology: this study counts firms by the highest AmLaw ranking assigned to the firm during 2011-2014.