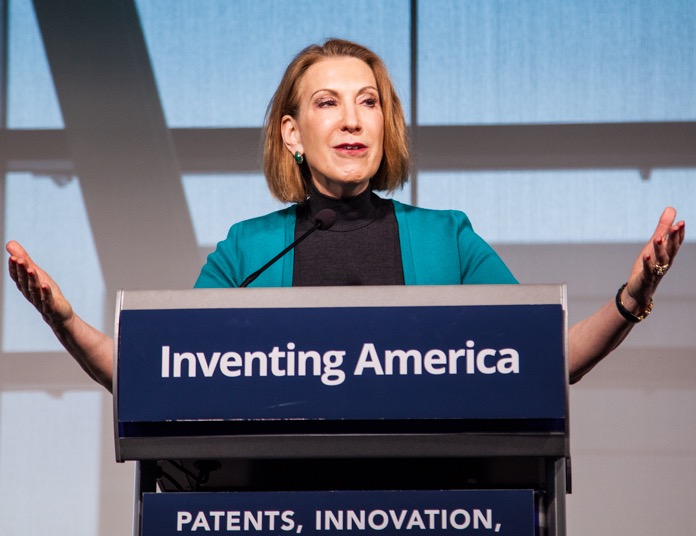 Carly Fiorina is perhaps best known as the former Chair and Chief Executive Officer of Hewlett-Packard Company (HP), positions she held from 1999 to 2005. But today, Fiorina is traveling the country in what many political observers believe is a prelude to declaring that she will run for the Office of President of the United States of America.

Yesterday, Fiorina, a likely likely Presidential Candidate gave a speech at Inventing America: Patents, Innovation, Jobs and the Economy, which was held at the Newseum in Washington, DC. She was introduced by former U.S. Senator Jon Kyl, and was well received by those in attendance. The message she delivered was clear — the government regulation and legislation is burdening small businesses. She explained that small businesses innovation at a rate of seven times that of big businesses. She also took aim at the Innovation Act.

Rather than summarize her remarks we have transcribed her speech below, focusing on those parts of her speech that specifically related to patents and innovation policy. Our transcript begins with the substance of Fiorina’s speech, beginning after her introductory and welcoming remarks.

… And has the capacity to live a life of dignity and purpose and meaning. And in order to be able to do so, they must own what their gifts produce. So, as we are taking about patent reform, let us not forget how impactful that incredibly important insight has been in our nations history. Our nation has thrived, because this is the country where virtually everything worth inventing has been invented.

Think about it. Think about the inventions that have occurred here. Think about the people, whether it is the cotton gin or the electric light bulb, think about the revolutionary inventions that were invented here by people here. And the reason of course it happened here is because people understood that they would get to benefit. That of course the world would benefit from their inventions, but that they also would get to benefit from the investment of their time, their talent and their treasure. In creating something that would make life better but also that will make their own lives better because they will be the owner of that output.

We have a lot of great, big companies in this country. And we are very proud of them. I was the Chief Executive Officer of Hewlett Packard for six years and in that time we went from $45 Billion to $90 Billion. We took its growth rate from 2% to 9%. We went from lagging behind in virtually every product and every market to leading in every market. And as Jon mentioned, we were spending a lot of money on R&D but not getting much out put and so we started to focus on output and we tripled our rate of innovation to 11 patents a day. But Hewlett Packard started as a little company. Hewlett Packard started as an idea of two guys in a garage. Bill Hewlett and Dave Packard went into the garage behind Dave Packard’s home and invented something. Google is a big company today but Google started with two guys in a dorm room. And the list goes on and on.

And here is the important fact on a conference about patent reform. Small and new businesses innovate at seven times the rate of big businesses. Seven times the rate! And if you know anything about the innovation process itself, which you no doubt do, you can understand why that is. Because what happens when a company gets big? When a company gets big it gets a little bit more bureaucratic. When a company gets big you have a lot of rules and you have got a lot of committees and you have a lot of people looking over your shoulder saying I don’t think that’s a risk worth taking. And you can over come all that as Google has, as Hewlett Packard did. You can overcome that inertia, that complexity. But the reality is that the process of inventing something new is peculiarly attuned to somebody without a lot of constraints around them. In other words, in order to invent, you have to be inventive, In order to come up with something new you have to have a lot of imagination and a lot of creativity, you have to be willing to take risks. So, to me, it is very logical that small and new businesses innovate at 7 times the rate of big businesses, because sometimes, a lot of money is less important to a big innovation than a really good idea and somebody with the passion to follow that idea.

I have experienced this in very personal terms when I was battling cancer. One of the drugs that has saved my life and has saved the lives of millions of women was invented by a single entrepreneur. And he battled the Food and Drug Administration and big Pharma and everyone else. He battled the industry for 15 years before he could bring that drug to market. So as important as big companies are and big capital is to our economy, to job creation, to invention, the truth is, and it has always been the case, the small inventor, the individual entrepreneur is even more important. We need to think about that as we think about patent reform.

At this point Fiorina’s speech turned political. She railed against crony capitalism and how that leads to big corporations and big government working together in ways that do not always, or even usually, benefit the individual or small business. During the segment of her speech she also talked about what she referred to as the “boil the ocean” response to problems. When faced with legitimate problems, for example such as needing to find a way to get health insurance for those with pre-existing conditions, the response is frequently to “boil the ocean,” rather than respond to the problem at hand in a focused way. Essentially, when Fiorina talks about a “boil the ocean” response she seems to clearly be discussing the tendency to over regulate and over legislate in ways that go well beyond what is necessary to address the defined problem at hand.

Fiorina then turned back to patents, and in particular the Innovation Act. She concluded her remarks saying:

And sadly now, with the Innovation Act, if I may be frank, we have a set of people who believe that there is a real problem. And there are some real problems. There are people who are committing fraud with patents. We have solutions for that. We have the court system. We know how to deal with fraud. There was a very targeted act called the Troll Act in the house that would have taken a very specific look at a very specific problem, but people were not content with that. People decided it was time to “Boil the ocean.” And have you ever noticed that all of these boil the ocean big complicated pieces of legislation, they always have a great title. The Affordable Care Act, who could be against affordable care? The Consumer Protection Act, who could be against consumer protection? The Innovation Act, we are all for innovation.

And frankly what happens frequently is people hope you don’t read the fine print. Yeah, I’m for innovation. But the Innovation Act, while I am sure that many of its sponsors and supporters have their hearts in the right place, watch carefully who is supporting that legislation. It’s not the small it’s the big. It’s the big companies whose ongoing economic benefit depends upon their ability to acquire innovations and patents at a lower cost.

If the Innovation Act were law tomorrow, Thomas Edison would be a Patent Troll. Really? Some of our greatest inventors would be Patent Trolls under this law. Our universities would be patent trolls. We are fixing problems that don’t exist. We are boiling the ocean. And so I would urge extreme caution and I would ask people to think carefully about the realities of who can handle big, complicated pieces of legislation and regulation. Who is benefited by complexity and complication? It is not the individual inventor or entrepreneur. It is not the new startup. It is not the small business struggling to find its way. It is not the engine of growth and innovation in this country.

I think we have the greatest economic and innovation engine in this nation that has even been invented in history. And if you doubt that, pause and think about this. The iPhone, Google, and Facebook. The iPhone was first introduced to the marketplace in 2007, less than a decade ago. In less than a decade our entire world has changed. In less than a decade we are now sitting at a point in human history unlike any other. Because, for the first time in human history, any person, anywhere, can gain access to any piece of information they choose and communicate with anyone else they choose at the time and place of their choosing. It is revolutionary.

And that reality will spawn many, many, many more inventions. It will create many more entrepreneurs. It will give so many more people the opportunity to find their God given gifts and to build lives of dignity and meaning and purpose. But we can stop it. We can crush it. The thing that always crushes that incredible power of individualism and invention and entrepreneurship is big, complicated, bloated bureaucracy.

So let us be cautious and let us think very carefully. Let us perhaps even, if I may use the word, be humble, that our founders had it right when they said that patents and intellectual property needed to be protected as a fundamental right of a citizen in this country. Let’s be humble and cautious before we decide to boil the ocean and solve problems that maybe don’t need legislators to solve them.