Teva and What It Means for Apple v. Samsung and Design Patents

This article examines the effect of one recent opinion in particular, Teva Pharmaceuticals USA Inc. v. Sandoz, Inc., on the law governing design patents, and how that opinion relates to one of the most notable design patent cases in recent years, Apple v. Samsung.[ii] Finally, this article identifies important areas where the Federal Circuit can clarify the law surrounding claim construction in design patents in light of this Supreme Court opinion.

Before discussing the specifics of the Apple v. Samsung case, a brief overview of design patents is instructive. Unlike utility patents, design patents only protect the ornamental design for an article of manufacture.[iii] They do not cover structural or functional elements. In fact, design patents are invalid where the design is dictated by function.[iv] Additionally, rather than having a series of written claims at the end of the patent, the figures and, at times, the description, are used to define a single claim to which the design patent is directed.[v] Consequently, the famed jurist, the Honorable Giles Rich, wrote “[d]esign patents have almost no scope.”[vi]

The infringement analysis for design patents is similar to utility patents—the first step is construing the patented design. The figures generally dictate the construction. However, because design patents only protect ornamental designs, the Federal Circuit has stated “[w]here a design contains both functional and non-functional elements, the scope of the claim must be construed in order to identify the non-functional aspects of the design as shown in the patent.”[vii] In the context of claim construction, the Federal Circuit has also observed that a court may point out various features of the claimed design as they relate to the accused design and the prior art.[viii]

After construing the claimed design, the second step in the infringement analysis is applying the ordinary observer test. Under that test, an ordinary observer compares the differences in the patented design and the accused product in view of the prior art to determine if they are substantially the same such as to deceive the ordinary observer into purchasing one believing it to be the other.[ix] As is apparent, because the scope of the prior art is relevant to both steps of the infringement analysis, it has a distinct limiting effect on the scope of the patented design.

Turning to the Apple v. Samsung case, representative figures from the three design patents at issue are shown below.[x] These designs essentially amount to a shiny black screen, a rectangle with rounded corners, and a screen with square icons arranged in a grid. 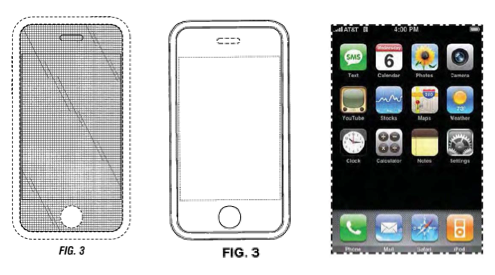 The Federal Circuit has explained that a court may aid a jury in determining design patent infringement by construing the claims . . . and that claim construction may, but need not, include listing functional elements that should be factored out of the claimed design . . . However, claim construction is a matter of law for the Court. The cases do not suggest that this type of claim construction is appropriate when instructing the jury. The cases engaging in such explicit filtering analysis generally do so in contexts in which a court then rules directly on infringement, such as summary judgment or a bench trial.[xi]

Samsung also argued that the district court did not properly instruct the jury on the role of the prior art in limiting the scope of Apple’s design patents. The district court likewise rejected this argument, noting that it had instructed the jury that the infringement analysis “will benefit from comparing the two designs with prior art” and that they “must familiarize [themselves] with the prior art admitted at trial” in making the infringement determination.[xii] The district court also provided the jury with a series of “guidelines” that “may be helpful,” three of which involved prior art considerations. These guidelines did not address any of the references raised by Samsung.

After trial, the jury found infringement and awarded the massive judgment against Samsung. The case is now pending at the Federal Circuit in several related appeals, with the latest oral argument occurring on Wednesday, March 4, 2015.

The Application of Teva to Apple v. Samsung and Design Patent Law

Second, the district court erred in refusing to instruct the jury on the scope of Apple’s patented designs in view of the prior art. Federal Circuit precedent such as Egyptian Goddess states that this extrinsic evidence may be relevant to claim construction. And Teva specifically requires that courts make subsidiary factfindings where there is a dispute about extrinsic evidence relevant to claim construction. In the Apple v. Samsung case, the prior art’s effect on the scope of Apple’s design patents was hotly contested. Thus, under Teva, the district court was required to construe the patented designs in view of that prior art, and instruct the jury on the proper construction. That also did not happen.

These two independent errors warrant reversal. But the Federal Circuit can do more. To be fair, the district court did not have the benefit of the Supreme Court’s decision in Teva. But now, the Federal Circuit has the opportunity to address the interplay of Teva with claim construction in design patents. This is a much needed clarification.

Indeed, to date, district courts have inconsistently implemented the guidance provided by the Federal Circuit in Egyptian Goddess.[xvi] In that en banc case, the Federal Circuit did not prescribe any specific form for construing claims, and simply stated that a court “may find it helpful to point out, either for a jury or in the case of a bench trial by way of describing the court’s own analysis, various features of the claimed design as they relate to the accused design and the prior art.”[xvii] The Federal Circuit also noted that the district court can guide the finder of fact by assessing the prosecution history or distinguishing between ornamental and functional limitations.[xviii] Since that decision, however, district courts have frequently deferred claim construction inquiries concerning the prosecution history, functionality, and the prior art to later stages of the litigation, including instructing juries on the particular issues—in effect deferring claim construction to the jury.[xix] Some courts have even concluded that consideration of the prior art is not relevant to claim construction. The result is that the claimed design is not truly construed until trial, and if it is truly construed, it is often the work of a jury as opposed to the court.

The Federal Circuit has the opportunity to provide a remedy in Apple v. Samsung. In view of Teva, the Federal Circuit should hold that where there is a dispute concerning extrinsic evidence—whether it is functional features of the patented design or the prior art—the district court must resolve those factual disputes and construe the claimed design. The Federal Circuit should clarify that it is inappropriate to defer claim construction to a jury with an instruction, whether on functionality or the role of the prior art. Additionally, the Federal Circuit should clarify that prior art is relevant to the first step of the infringement analysis—claim construction. Using prior art only in the second step of the infringement analysis invites juries to reconstrue the patented design as they see fit. Teva does not allow that. Indeed, to hold otherwise would result in juries making subsidiary factfinding concerning claim scope. Finally, requiring that the court construe the patented design, including resolving any subsidiary factual disputes, may encourage earlier constructions. Courts have been experimenting with earlier claim constructions in utility patent cases to encourage early resolution. Design patent cases should benefit from the same. It is exceptionally inefficient to not construe the patented design completely until the jury is off in the deliberation room. Understanding the actual scope of the patented design earlier in litigation will allow parties to assess the strengths and weaknesses of their respective cases and better weigh a business resolution to their disputes.

The Federal Circuit should take this opportunity to clarify this important area of the law using the Apple v. Samsung case.

[xi] Apple, Inc. v. Samsung Elecs. Co. Ltd., 920 F. Supp. 2d 1079, 1091 (N.D. Cal. 2013). The district court also concluded that Samsung had not shown that the designs contained functional elements that warranted a filtering instruction. However, as I discuss in a previous article, the district court was applying the wrong standard in assessing functionality for purposes of claim construction.