PTO Should Release SAWS Numbers Given Impact on Examination Process

We have been investigating the secret Sensitive Application Warning System (SAWS) at the USPTO for months. Last fall, in response to a Freedom of Information Act (FOIA) request, I received a collection of memos from the USPTO. The memos included approximately 100 SAWS-eligibility criteria. If an examiner determined that a criterion applied to a particular application, he is to notify his supervisor to consider it for the SAWS program, and the supervisor is to validate the determination propose the SAWS designation to superiors. Once an application is in SAWS, a sizable group of people (seemingly up to 8) must approve examiner-drafted notices of allowances before such notices are actually issued. (A more complete summary of the memos can be found here.

The SAWS-eligibility criteria are many, broad and vague. For example, select identified items include:

Seemingly, a large portion of patent applications could be subjected to SAWS. We, and others, requested identifications of SAWS application numbers, but the USPTO has repeatedly denied such requests, asserting that the data is privileged and relates to internal operations. Recently, the USPTO did grant one request that at least identified high-level statistics pertaining to the program. An initial report identifying some of these statistics was published in Law360. Additional data follows.

Few SAWS Applications Begs the Question: How are they Selected? 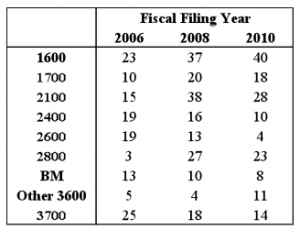 Table 1 shows the number of applications in each technology center evaluated under the SAWS program. (Technology center 3600 was divided into business-method “BM” art units and other art units.) Very few applications are entered into the SAWS program – approximately 1 in 2500. This is in accordance with Brian Stanton’s article recounting his experience with the program and data that appeared on a new USPTO webpage that was posted during pendency of the above-referenced data request. As shown, SAWS classifications are most prevalent in Technology Center 1600.

Given the very broad and diverse SAWS-eligibility list, it was surprising that so few applications were evaluated under SAWS. Thus, there appears to be more to how applications are selected for SAWS designation than what was released previously by the PTO. Perhaps this additional information is not memorialized. Brian Stanton’s article contends that the SAWS program is designed to have over-inclusive eligibility specifications and to evaluate “high profile or complex legal, ethical, or controversial subject matter”. However, as it stands, the SAWS-eligibility list seems to be so broad that it is close to indicating that all applications are eligible for SAWS review and such that it provides very little information or guidance to applicants as to whether an application will be subjected to this enhanced review. Further, the list has only been published via the author’s FOIA request and still does not appear to be published by the USPTO.

SAWS Applications are Less Likely to be Patented

However, a sizable portion of SAWS applications have already issued as patents, indicating that the USPTO eventually determined that these applications related to technology that was worthy of a patent. Therefore, prosecution statistics for the SAWS patents were compared to those for other patents. As shown in FIG. 2A, the average number of office actions issued per SAWS patents is substantially higher than for other applications. Overall, the average was 2.3 office actions per patent for all patents with a 2006 filing date and 4.3 for SAWS patents with filing dates in the same year. Additionally, RCE filings were more common in the SAWS patent set, with an average of 1.2 being filed per SAWS patent, and only 0.48 filed for the general application set.

This increased office action and RCE prevalence has been estimated to correspond to a near doubling of prosecution costs for applicants (an estimated additional $7000 per SAWS patent, on average).

As reported in one of the author’s articles in Patently-O, the total pendency of SAWS patents is also substantially longer than other applications. At least some of this delay is likely due to the increased Office-Action counts. Overall, the average time from filing to issuance is 6.0 years for SAWS patents and 3.5 years for all patents filed in 2006. This difference will likely become more pronounced assuming that at least some of the pending SAWS applications will eventually issue.

It has been contended, by the USPTO and others, that the SAWS program is a reasonable, quality-control measure. The author currently does not take issue with whether the program is reasonable. At present, sufficient information or data has been provided to assess whether the performed enhanced reviews of SAWS applications were appropriate, as those applications have not been identified.

What is an issue is that the agency is not transparent about the program. Up until December 2014, the USPTO did not seem to have any reference to SAWS on their website or in the MPEP. Subsequent to the author’s first publication summarizing the received memos, a SAWS webpage appeared on the USPTO website, though it merely includes goals of the program and select statistics and does not detail the actual workings of the program.

Our data seems to indicate that the SAWS program is altering the patent-examination process for applicants subjected to the program. It appears to reduce patenting potential, and – for those applications that eventually issue – they must survive more office actions and longer pendency. This changed landscape would likely change the way an applicant prosecutes an application. The applicant may choose, for example, to abandon the case early on or enter more drastic amendments in view of the tougher road ahead.

Further, the structure of SAWS indicates that multiple people can, in essence, veto an examiner’s proposed allowance. At present, not only are these additional people not identified to the applicant, but the applicant is unaware that the additional people are involved. Anecdotal accounts describe instances where conversations with examiners become nearly futile when an application is a SAWS application. An examiner can indicate that an amendment will place an application in condition for allowance, but such allowance can then be immediately thwarted by the additional reviewers. In the meantime, the applicant may nonetheless continue to amend the claims (potentially creating prosecution estoppel), spend time interviewing an examiner and creating prosecution history.

These impacts of SAWS indicate that there are several issues with SAWS. It is not a minor agency-internal policy that has no impact on applicants. Accordingly, the agency should have gone through official rulemaking (e.g., notice-and-comment) processes and arrived at codified rules defining how the program will be implemented. Currently, the program structure does not give any clear indication as to which applications will be designated as SAWS applications and does not provide applicants with notice of such designations. Both of these issues violate procedural due process. Had the agency complied with rulemaking requirements, commenters would have likely identified such issues and the USPTO may have been able to address them.

Adam Charnes, a partner at Kilpatrick Townsend specializing in constitutional and complex business litigation, says that SAWS “violates several basic administrative law and constitutional norms.” He continues that applicants with applications “placed in the SAWS program without notice; having been unreasonably delayed by inclusion in the program; or having been denied because of the stricter standards of the SAWS program” could consider legal action. However, because SAWS designations are not disclosed, applicants may not even know that the facts support a challenge. He concludes that, at present, “ if the PTO continues to refuse to disclose the workings of the program indicate that a lawsuit or FOIA appeal may be the only way to achieve transparency and reform.”

The author joins others in calling on the USPTO to start addressing the SAWS issues by increasing its transparency. Specifically, SAWS application numbers should be released and applicants should be informed of subsequent SAWS designations. The author can think of no justifiable reason why the USPTO would be so reluctant to disclose this information. Only upon release of this data can the public evaluate whether this program is an unbiased, reasonable program, and only then can applicants make informed decisions about how to prosecute their patent applications.