We recently published an article discussing the state of innovation in the automobile sector. This first article in our two-part series compared the patent activities of U.S. automakers against those of other automobile manufacturers around the world. This review was prompted by a recently released Thompson Reuter’s study on the st

In terms of what’s being invented by major innovators in the automotive industry, it seems that the vast majority of the increase in patenting activities among all carmakers can be attributed to propulsion systems. The number of patents issued annually for fuel propulsion has raced forward from less than 2,000 in 2009 to nearly 12,000 in 2013. No other segment of automotive technology has seen such a dramatic rise in patents over those few years.

Some of this increase in R&D for propulsion systems is tied to an increase in alternately powered vehicles as well as hybrid vehicles. However, a great deal of this activity is also the result of stronger fuel economy regulations for vehicles, such as the United States’ fuel economy standards mandate for cars and light-duty trucks to reach 54.5 miles per gallon by 2025, announced by the Obama administration in August 2012.

Given these strict guidelines, it’s not strange to note that two of the top three companies receiving patents in this field, GM and Ford, are American corporations. However, the leader in IP development for propulsion systems is the rapidly rising Hyundai Motor Company. In 2009, Hyundai’s activity in this sector was practically nil but it led the pack in 2013 with slightly more than 200 patents in the field; 2nd-place Ford earned slightly more than 100 patents that year. 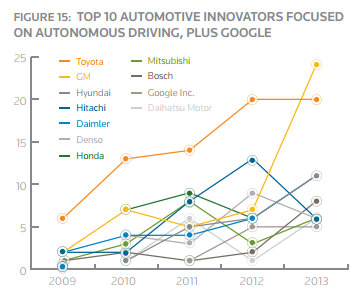 The Thomson Reuters study also identifies autonomous driving as a “hot topic” area in the current state of global automotive innovation. No single company has been earning more than 25 patents a year in this field, as of yet, but there are certainly many players who are becoming more active in this area. GM had the greatest one-year increase between 2012 and 2013, nearly quadrupling the number of patents it was able to earn in this sector. The number of autonomous driving patents earned in 2013 by GM beat out Toyota, which had held the lead in those patents since at least 2009. Overall, the autonomous driving sector has increased from 73 patents in 2009 to 510 patents in 2013, an incredibly rapid pace of growth.

Conducting similar research using the Innography search tool, searching for “autonomous driving” or “self driving” or “autonomous car,” for the time period between January 1, 2009 and January 22, 2015, Google received the most U.S. patents in this space, with 21.7% of the patents issues. Google was followed closely by Eagle Harbor Holdings, a non-practising entity that has frequently been mischaracterized as a patent troll [1], with 19.1% of patents issued during this time frame. For more please see the Innography visualization below. 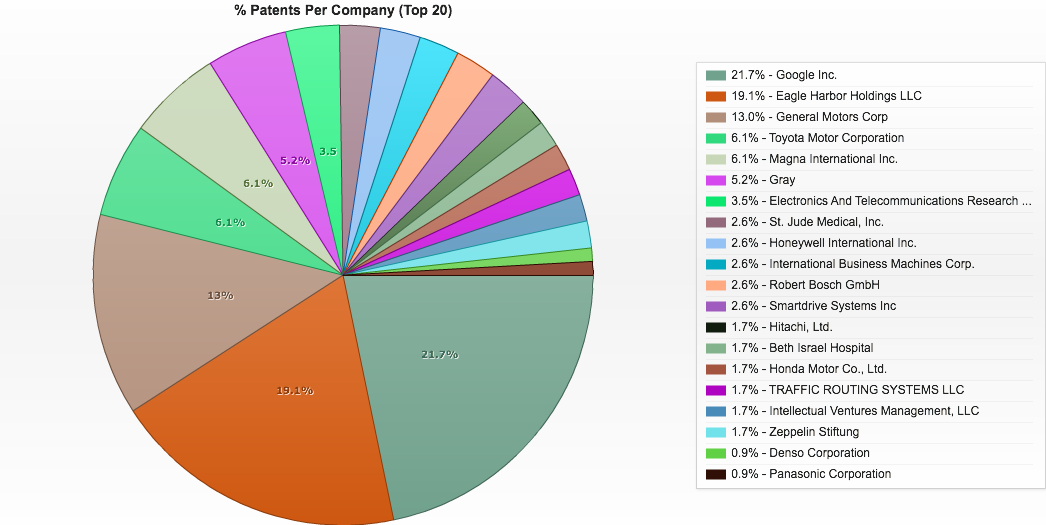 When international patent activity is viewed using an Innography search, General Motors has a strong lead over Google, with all other companies registering on in the single digits. 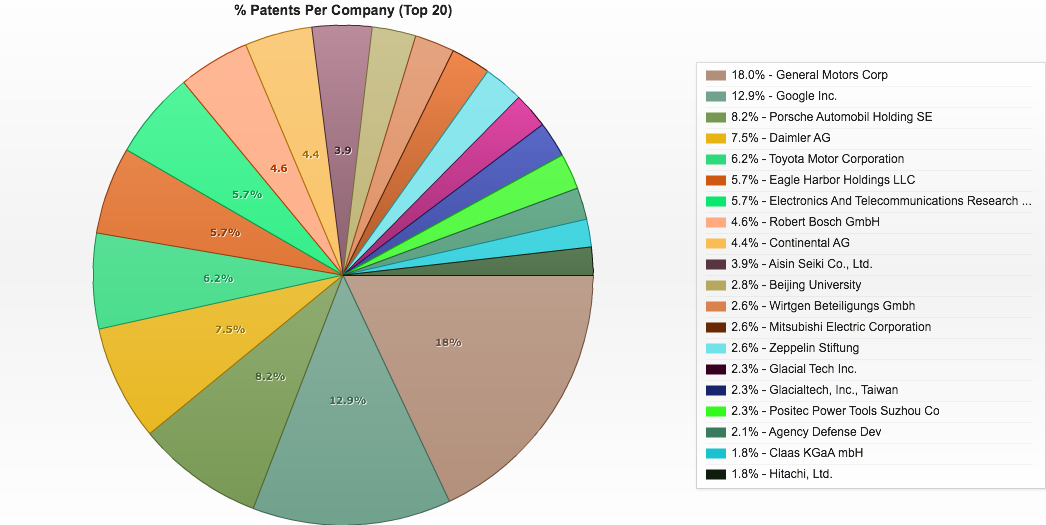 Other hot topic areas like driver assistance, dominated by Bosch, and telematics, or systems for vehicle communication in which General Motors holds the lead, are closely tied to self-driving vehicular technologies. Current telematics technology includes dedicated short range communications (DSRC), a two-way communications protocol developed specifically for automobiles, and IntelliDrive, a wireless communications standard similar to Wi-Fi. Telematics involves the use of communications networks to provide Internet-related multimedia services to vehicle passengers but could be used to support navigational tools and techniques as well. As Stembridge points out, telematics patents increased six-fold between 2009 and 2013 to about 600 patents issued in the field. Driver assistance technologies still require a driver to be in control of the vehicle but can provide many support functions that make driving much safer, including pedestrian detection, traffic sign recognition, blind spot detection, lane departure warning and intelligent braking.

Again turning to the Innography patent analytics tool, we found that since 2009 there have been 1,623 issued U.S. patents that relate to telematics, DSRC or IntelliDrive. General Motors has a commanding lead, with just over one-third of all U.S. patents issued in this space. Ford comes in a distant third with 7.9% of issued patents. However, as the complete chart shows, U.S. companies are dominating patenting in this space, with companies such as Microsoft, IBM, Intellectual Ventures, AT&T, Apple and DirectTV all having patents in this developing space. 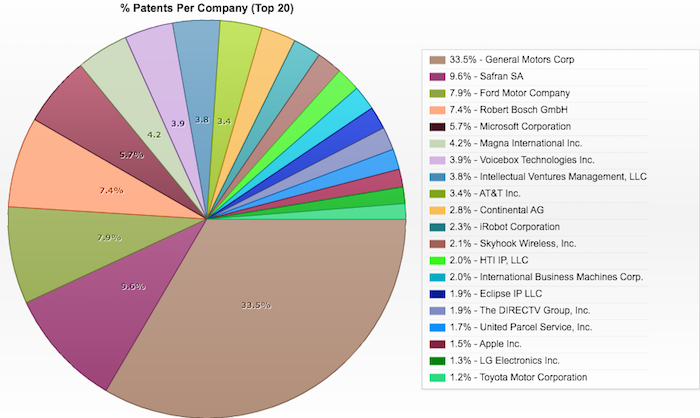 A fifth area of technological development that was highlighted by the Thomson Reuters report was in heads-up displays, or HUDs. These systems work to display contextual information about certain driving conditions, such as vehicle speed and outside weather conditions, in such a way that driver distractions are mitigated. In many cases, this information is displayed on the windshield directly in front of the driver. Interestingly, the list of top companies in this field include many we don’t typically hear about in auto industry media coverage. The top three companies receiving the most patents in HUDs during 2013 were Universal Display, Johnson Controls and Pioneer.

[1] Although it goes beyond the scope of this article, Eagle Harbor Holdings does engage in research and development. They are also an active acquirer or patents. Many times there is little nuance associated with the definition of the term “patent troll,” and frequently any non-practicing entity is erroneously characterized as a patent troll. Patent trolls are most appropriately so-characterized for abusive litigation tactics. If a research and development company that licenses what they develop were to be considered a patent troll so too would inventors like Thomas Edison. For more on this topic please see Patent Trolls and Who is a Patent Troll? and Was Thomas Edison a Patent Troll?