Software and business methods over half of Google, Microsoft US patents

Software and method patents may appear to have fallen out of favor because of recent court decisions and legislation. However, recent trends indicate that they comprise surprisingly high portions of four US companies’ recent grants.

Better than half of the patents issued to Google and Microsoft by the United States Patent and Trademark Office (USPTO) in 2014 were methods-related patents, and more than one-third to IBM and one-quarter to Apple. This is according to data collected and analyzed by Envision IP, a law firm specializing in patent research.

Alice v. CLS Bank decided in June by the United States Supreme Court made the bar for affirming software patents considerably higher than in the past. Software inventions now have to show that they are not directed to mere abstract ideas or that they are not simply existing solutions that have been expressed with a computer.

The Patent Trial and Appeal Board (PTAB), which was established as a result of the American Invents Act, also made proving validity more challenging, especially for methods patents. Reviews to date have invalidated nearly 78% of claims in cases instituted by the PTAB, with almost a quarter of all AIA petitions filed in fiscal year 2015 directed towards methods claims.

Despite the new case law and recent legislation some active patent filers continue to pursue and receive patents in significant numbers in USPTO classifications 700-708, 715, 717, 726 and 902, which are typically associated with software and methods. (See pie chart below) 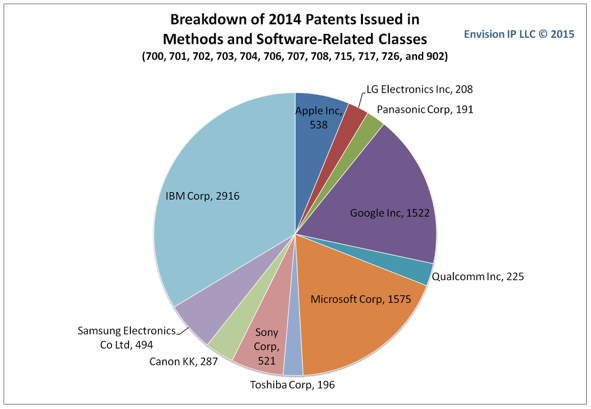 The Numbers Tell a Story

Companies intent on obtaining method patents include Google, for the first time in 2014 in the top ten of US patent recipients, in eighth place just behind Toshiba and Qualcomm. Of the 2,599 US patents granted last year to Google, 1,522, or 59% were in the methods classes. Microsoft, with 2,847 patents received, had 1,575, or 55%, that fall under the heading of methods.

Perennial US patent recipient leader IBM secured 7,540 patents, and received the most methods-related patents with 2,916, 39% of its total grants for last year. Not to be outdone was Apple, with 2,037 patents, 538 or 26%, which are associated with software and methods. Samsung, LG, Qualcomm, Panasonic, Canon and Toshiba, all top-ten US patent recipients for 2014, secured less than 10% in methods.

Our analysis indicates that many of the foreign multinational technology companies that top the list of US patent recipients are focused on receiving hardware and non-software related patents.  For example, less than one-tenth of the patents issued last year to Samsung Electronics, Canon, Toshiba, Panasonic, and LG Electronics were in the methods and software-related classes that we analyzed. This is not necessarily surprising, as these Korean and Japanese technology icons have for decades been known for their diversified consumer electronics products, notably televisions, cameras, and media players.

Microsoft, Apple, Google, and Sony tend to sell products that are software or methods-dependent and are connected to smart devices powered by cloud technologies. We would expect these companies to have a higher percentage of recently issued patents in software and methods-related classes.

The data also suggest that some large filers may believe that their software and methods-related patents are better than others that have been previously granted and can be defended, if necessary. Another possibility is that recent methods recipients believe there is little likelihood that their patents will ever be tested in court or at the PTAB. 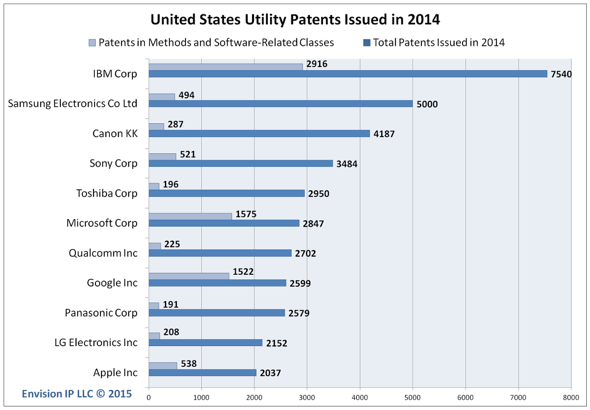 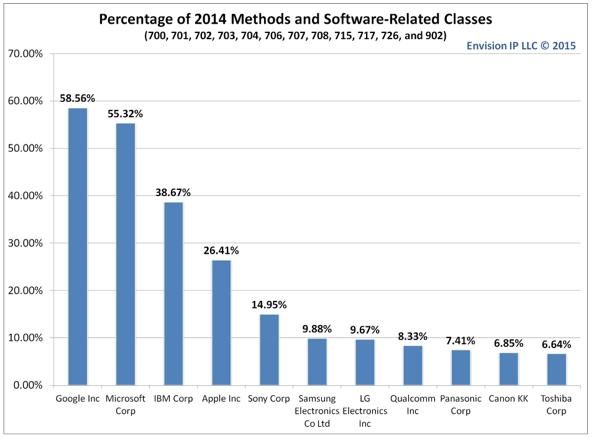