When USPTO Classifies an Application Incorrectly

EDITORIAL NOTE: Many no doubt are familiar with Carl Oppedahl, who for the last 10+ years has been writing an e-mail based newsletter. Carl has now joined the ranks of the blogging community and has asked me to notify readers of his new blog. With that in mind, and with Carl’s permission, what follows is a republication of his first blog post, which published on February 21, 2014.

In our office we try to track pretty closely the status of the cases that we have put on the Patent Prosecution Highway.  It is a rare PPH case that reaches its first Office Action without at least one problem within USPTO that requires us to poke the USPTO.  Today one of our PPH cases presented a problem that we had not seen before — a big delay in examination because the USPTO misclassified the case.

This case had been made Special on the Patent Prosecution Highway in October of 2013 because of a favorable Written Opinion from a PCT Searching Authority.  For a Special case, USPTO’s case management system normally starts ringing an alarm on the Examiner’s desk after a couple of months.  So we should have seen an Office Action at least a month ago, maybe two months ago.  But that only works if the case has been assigned to an Examiner.  Often the USPTO first assigns the case to a SPE and then it is left to the SPE to figure out which Examiner in the SPE’s art unit should actually examine the case.  This case got assigned to the SPE in a particular art unit.  Let’s call him “SPE V”.  It seems that SPE V decided that this case had been misclassified and should not have gone to his art unit.  So he tried to get rid of it. 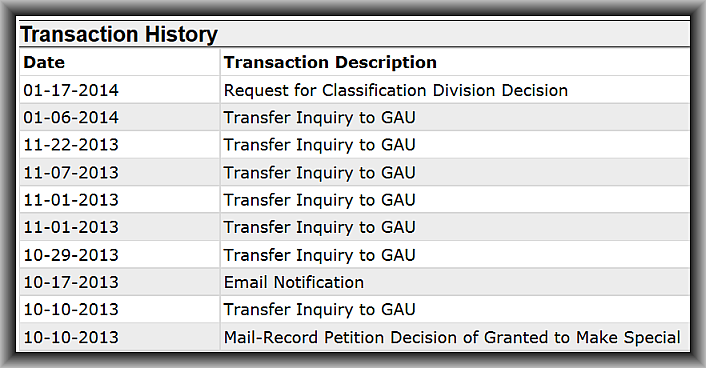 Then on January 17 SPE V did something that I have never seen before in any transaction history of any file — a “request for classification division decision”.  As the MPEP describes it this would be a decision of a “classification dispute technology center representative panel”.

Years ago the classification of newly filed US patent applications was done by USPTO employees.  But at some point a decision got made within the USPTO to outsource the classification process for new patent applications.  Since then, the classification has been carried out by a government contractor.   The contractor often misclassifies cases — in our recent experience this happens about 10% of the time.  When it happens, the case has to be transferred from one art unit to another.  Normally this only delays things by a week or two.  I am not sure what exactly went wrong with all seven of SPE V’s efforts to kick the case.  But as of today he has not managed to get rid of the case despite four months of trying.

When I looked things up to see if I thought it looked misclassified, I was reminded how very poor the classification manuals and resources on the USPTO web site are.  If you already know the US patent class and subclass, it is fairly easy to work out what the description is for that class and subclass.  But going the other way is not easy at all.  It is nearly impossible to do a meaningful text search or keyword search in the manual of classification.  You have to sort of already know where in the manual your application belongs and then you go and look in that part of the manual to try to work out the subclass.

The application that SPE V is trying to get rid of is a US national phase from a PCT application.  In January of 2012, as part of the PCT process the International Searching Authority already carried out the task of classifying this technology.  The ISA (in this case, the Korean patent office) figured out that the case is in a particular international patent class.  Yes, the ISA correctly figured out that the application had to do with television monitors (to use my example) rather than cross-country electrical transmission lines.

Anyway in this case the task of classifying this technology is work that already got done (and got done correctly) more than two years ago.  But USPTO did not make any use of that work, and instead sent the task to a contractor who got it wrong. And the consequence is that our client has been denied the prompt prosecution that our client ought to have received on the Patent Prosecution Highway.

Carl Oppedahl is a patent attorney who is technically trained in physics, electrical engineering, mathematics, and software engineering, having earned a bachelor’s degree with a double major in physics with honors and mathematics with honors from Grinnell College in 1978 and a law degree in 1981 from Harvard Law School. He has written and prosecuted numerous patent applications in electrical engineering, computer software system, and mechanical areas. Carl also serves as an adjunct professor at University of Denver School of Law, teaching Advanced Patent Law. He served for many years on the faculty of the Practicing Law Institute’s Patent Bar Review Course and served as an adjunct professor at Cardozo Law School where he taught Advanced Patent Law. He has lectured in continuing legal education (CLE) programs in New York, Texas, California, Georgia and Colorado.