In a recent article on this blog, Gene Quinn reported on The Rise of Patent Litigation in America  in 2010, 2011 and 2012 and propounded the question: “what explains the significant uptick in the number of patent litigations initiated?”  Gene appropriately cautions readers from speculative conclusions that the rise in the number of lawsuits is somehow due to rampant patentee abuse of the legal system.  He appropriately rules out as a significant factor the fact that there are more patents being issued, as this has been a trend for years.  Notably, Gene is on to something as he suggests that “the prohibition against suing numerous defendants in a single case ushered in by the America Invents Act (AIA) is to blame for at least a portion of the increase that occurs after September 16, 2011.”  As shown below, it is ironic and highly likely that the AIA – the legislation touted by its proponents as the instrument to reduce the number of costly patent lawsuits – is in fact the major cause for their increase in the last three years.

Several factors created by the AIA caused, and will continue to cause, increased rate of lawsuit filings.  Several of these factors were building up even before passage of the AIA in September 2011, as patentees acted prophylactically or in anticipation of more adverse legal conditions at various phases of the AIA implementation.  Examples follow:

As codified by the AIA, 35 U.S.C. § 299 substantially curtails joinder of multiple defendants in a single case, requiring multiple lawsuits where one would have been filed before September 2011.  Moreover, because this provision raises the initial costs for patentees who assert their patents against multiple defendants, it is highly likely that a significant portion of the increase in the number of suits filed before September 2011 (the effective date of § 299) was due to patentees’ efforts to avoid the bifurcation of cases that name multiple defendants.  This provision will continue to contribute indefinitely to more lawsuit filings.

But there is more to the significant uptick in the number of suits filed in the last couple of years.  When such surges are observed, it is unlikely to be a mere inexplicable spontaneous fluctuation and a further inquiry into the nature of the surge reveals a fundamental change in patent litigation trends: the increase in lawsuit filings appears to be dominated by assertions of newly issued patents – a dominant trend that was not there before the AIA.

The graph in Figure 1 below shows a histogram of the age of asserted utility patents at the time that an infringement complaint is filed.  As this graph shows, filings during 2009 – the last year before the onset of the surge shown in Gene’s article – patents that were 1-5 years old were most frequently the subject of an infringement lawsuit.  In contrast, filings in 2012 were dominated by newly issued patents at an unprecedented factor of two compared to any other patent age category.

The only plausible explanation to this change that comes to mind is based on the relationship between Federal court actions and the AIA-created administrative proceedings of Inter Partes Review (IPR), Post Grant Review (PGR), and the Transitional Program for Covered Business Method Patents (TPCB), which is governed by PGR rules.  These proceedings are conducted at the Patent Office where there is no presumption of validity and where proof of unpatentability is by mere preponderance of evidence under the broadest reasonable claim construction – standards that are more detrimental to patentees than those in the Federal courts. 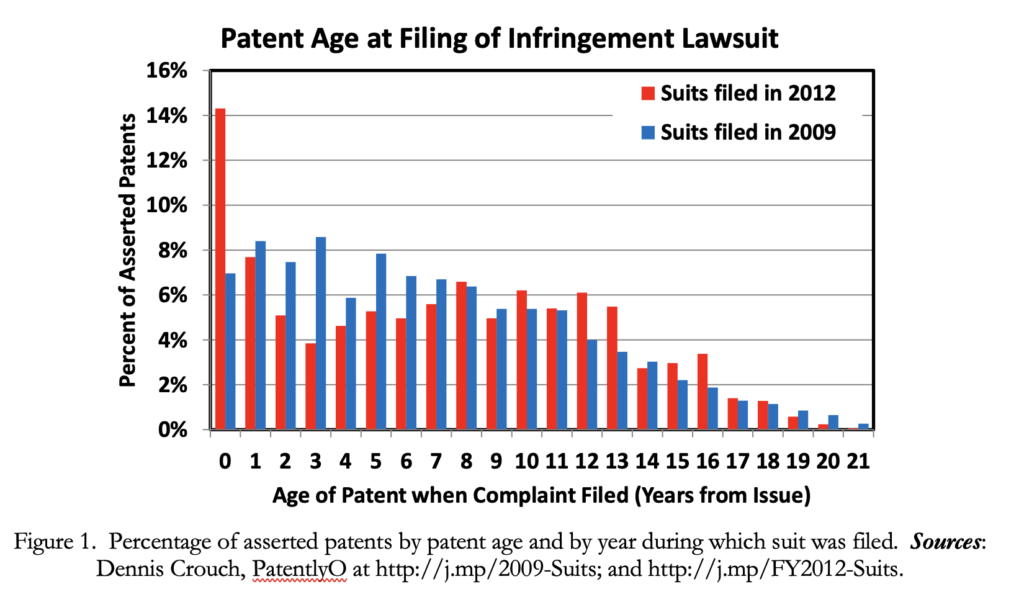 A rational patentee would naturally act to minimize the opportunities for potential accused infringers to avail themselves of the benefits of IPR/PGR/TPCB by identifying infringers and filing suits much earlier, even prophylactically.  For example, the new statute at §325(b) codified by the AIA provides that if a patentee files suit for infringement within 3 months of the patent issuance, the court may not stay a motion for preliminary injunction on the basis that PGR (or TPCB) petition was filed or instituted.  Thus, ever since §325(b) first passed in a bill even before passage of the AIA, this provision would have motivated patentees (particularly of Covered Business Methods) to identify infringers as soon as a patent issued and file a suit within 3 months so as to preserve the patentee’s preliminary injunction power.  This incentive clearly remained after passage of the AIA and is most likely to be the major cause for the disproportional share of actions against accused infringers of “zero-old” patents during 2012 as depicted in Figure 1 above.  It is worth noting that contrary to allegations made by the anti-patent crowd that Non Practicing Entities (NPEs) are to be blamed for the uptick in recent lawsuit filings, the dominance of suits based on “zero-old” patents in 2012 suggests that these allegations cannot be credible at least for that year because NPE’s mostly acquire older patents and in any event, the preliminary injunction rights secured by early filing are foreclosed on NPEs anyway because of the eBay decision.

Incentives to advance the filing of patent infringement suits before the AIA enactment in September 2011 also grew substantially due to AIA’s §315(b) which provides that no IPR can be instituted if the petition is filed more than one year after petitioner is served a complaint alleging infringement of the subject patent.  Thus, in order to inoculate any particular existing infringed patent against the threat of IPR challenge, patentees simply had to advance filing lawsuits earlier than September 2011, which was one year before any party could institute an IPR proceeding which came into effect in September 2012.

We read daily about the alarming rise in patent litigation.  These are no different than the complaints that led to the enactment of the AIA.  It is ironic and perhaps predictable that it is the AIA that appears to be the dominant cause of the recent major uptick in patent lawsuits.

Ron Katznelson, PhD Dr. Ron D. Katznelson is the Founder and President of Bi-Level Technologies, an image and signal-processing technology company in Encinitas, CA.  He is a technology entrepreneur, named inventor on 25 [...see more]